Much of North Fife is covered in rich productive arable land, farmed increasingly with use of sophisticated heavy plant and machinery. The capital costs of this gear is beyond the means of many farms and so need arises for contractors to do the work. Movement from farm to farm requires frequent use of the narrow rural roads, all very well until one meets such giants. A  question of patience if following or long reverses to a safe place when confronted. 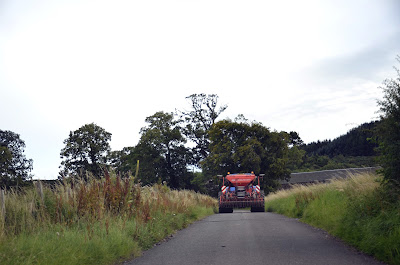 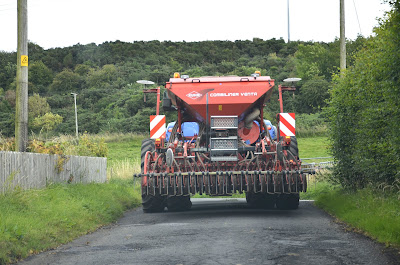 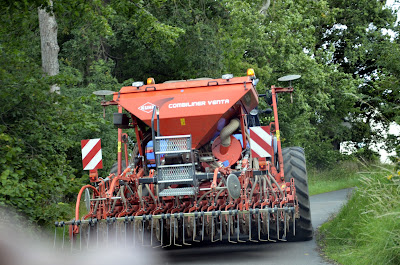 Quite some seed drill.
Posted by Peter Mannox at 10:50 PM 1 comment:

Usually associated with river banks where it can grow in profusion. This little patch is by the roadside near Newburgh North Fife. Seeds were imported from India in 1839, now invasive and naturalized, distribution is discouraged. Each flower produces 100s of seeds which are propelled up to 4 meters away from the parent plant. 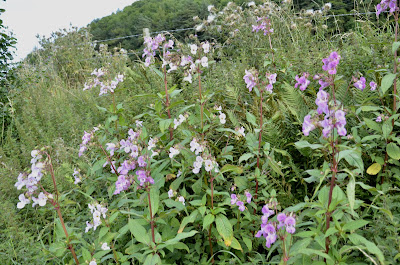 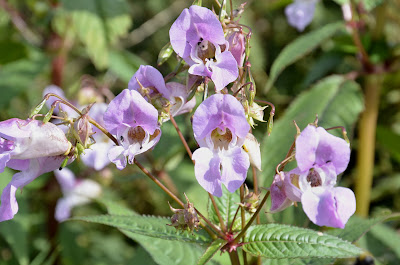 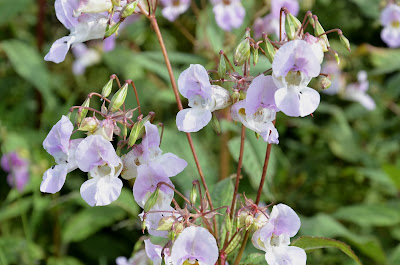 A few views of the River Tay and sky earlier this year, every day it is different and although none have been posted before (lack of internet connection and functional computer) I am now. 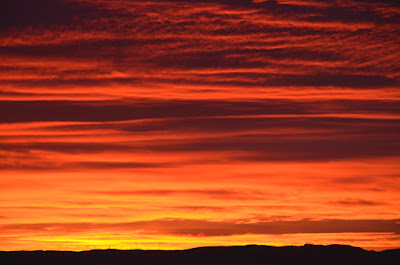 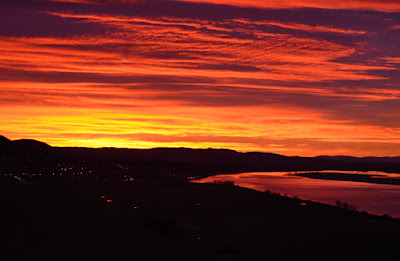 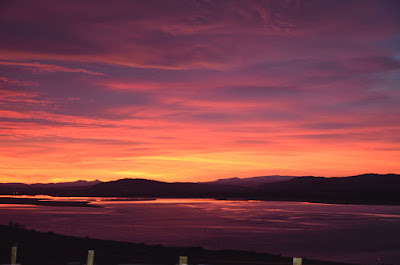 Posted by Peter Mannox at 7:02 PM No comments: 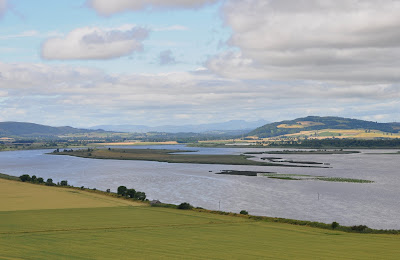 New Forth Road Bridge building grows apace, this is how it appeared on Saturday 1st August. 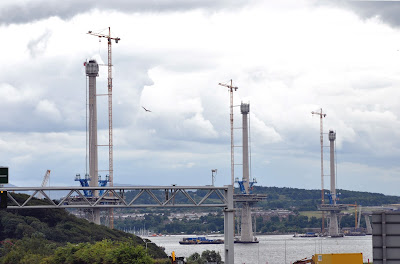 Posted by Peter Mannox at 4:02 PM No comments: 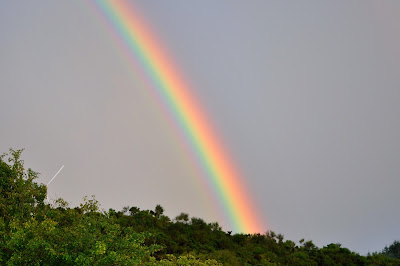 Unusually strong, it lasted a good full 20 minuets, so insistent that after some time I just had to go outside and photograph it.

Posted by Peter Mannox at 6:13 PM No comments:

Autumn Newburgh North Fife. A very wet one...so much rain, evidenced by the standing water here, the roads are awash. Wonderful colours from the leaf fall shed by cherry trees by the Abbey garage. 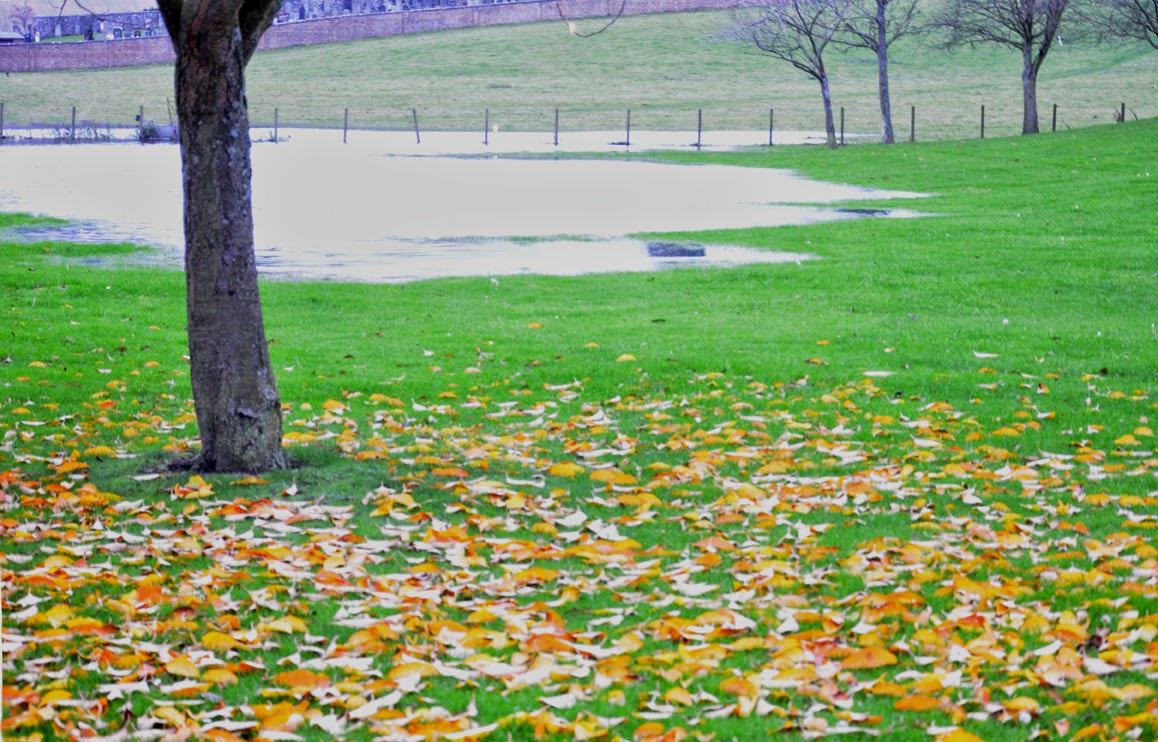 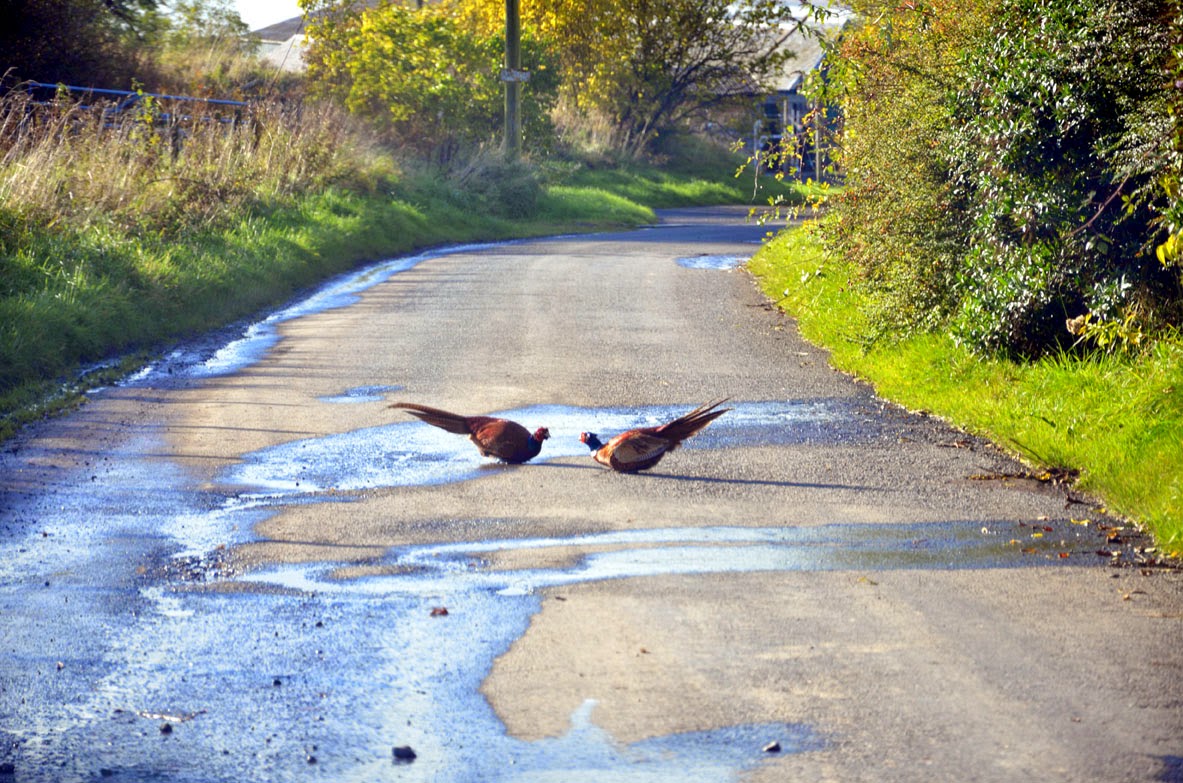 Cock Pheasants sparing for dominance (as they do) on the road beside my house one of which now spends its time with the ducks in my garden and is becoming quite tame. Such is their testosterone imperative, many fall victim to traffic, oblivious to me when I took this picture.
Posted by Peter Mannox at 9:00 PM No comments:

Castor oil plant at The Steeple Arts courtyard Newburgh, just starting to flower from the profusion of buds atop the 5ft high growth. 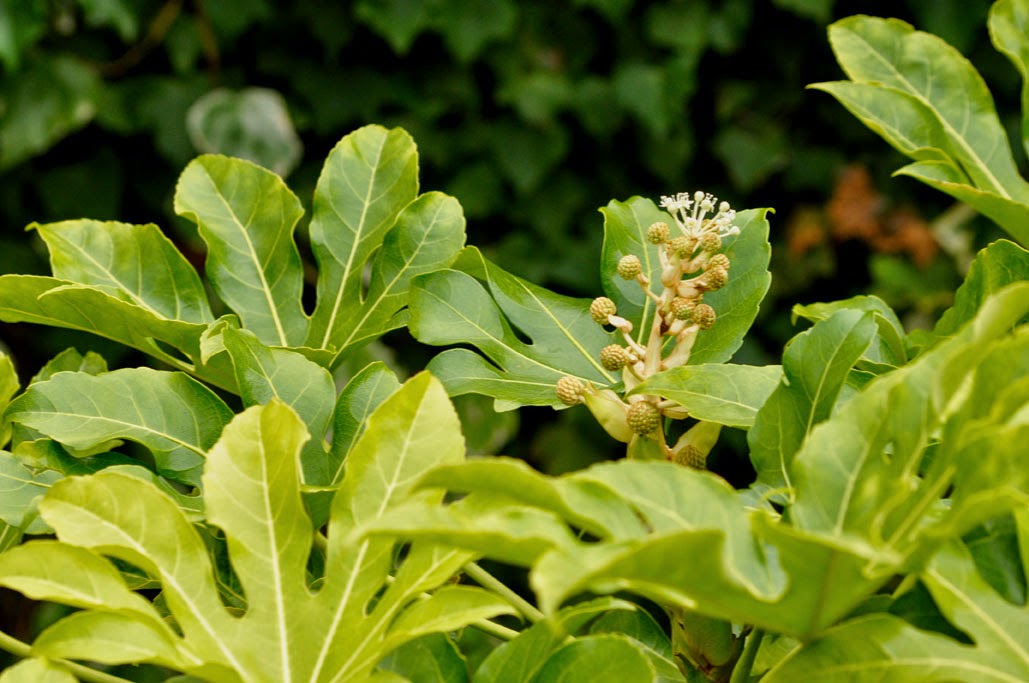 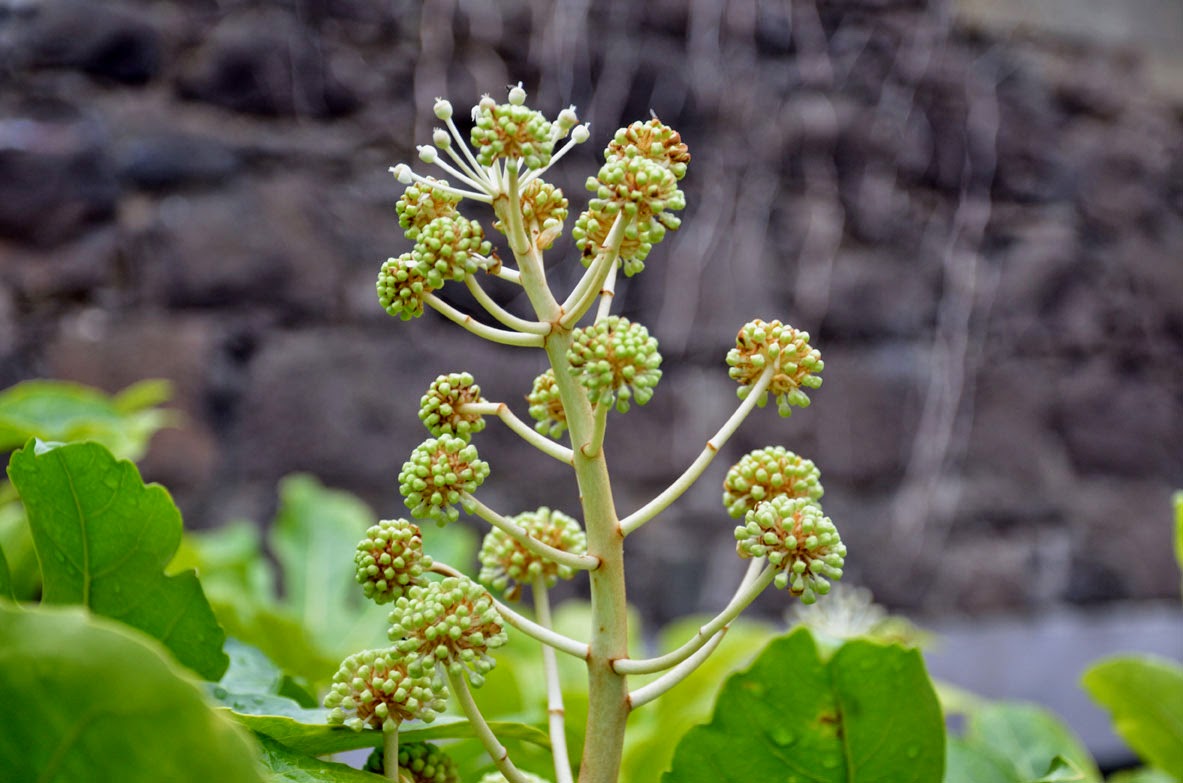 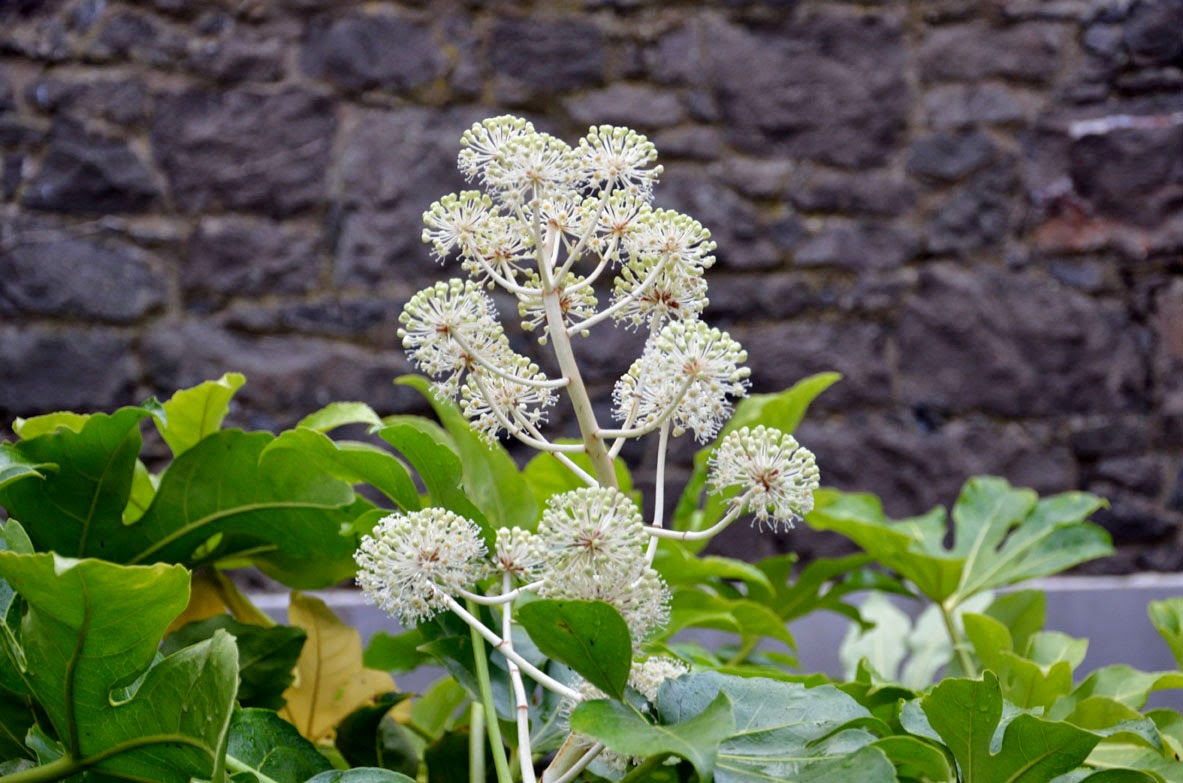 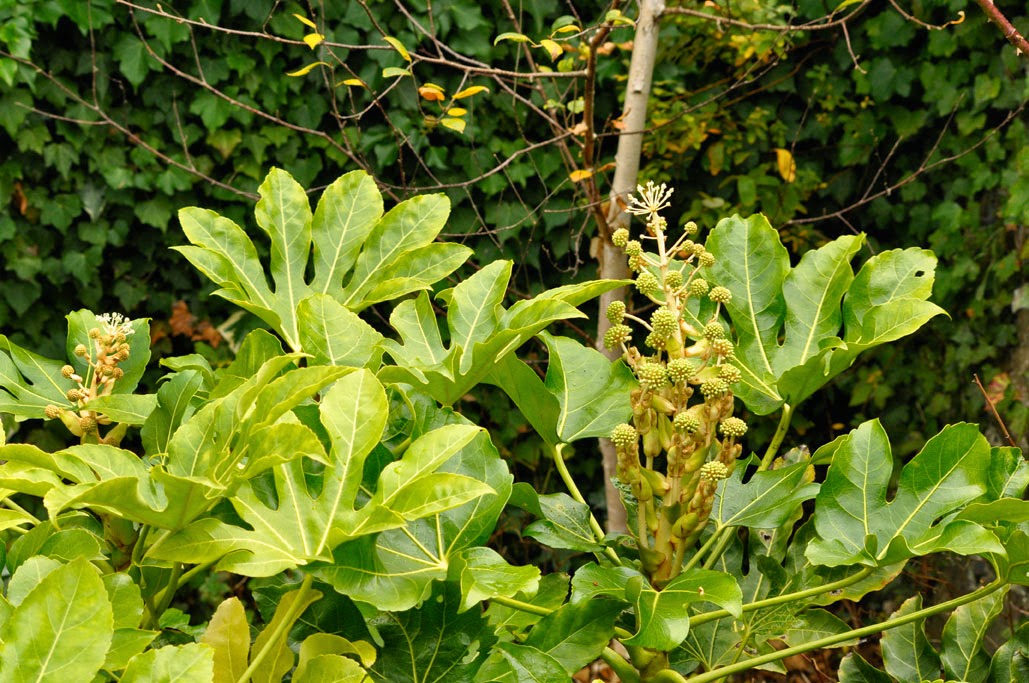 Posted by Peter Mannox at 2:18 PM No comments:

Looking East towards Dundee from the road by Balinbreich, I was struck by the clear line of the dew point bottom of the cloud and remarkably a similar colour to the fields below 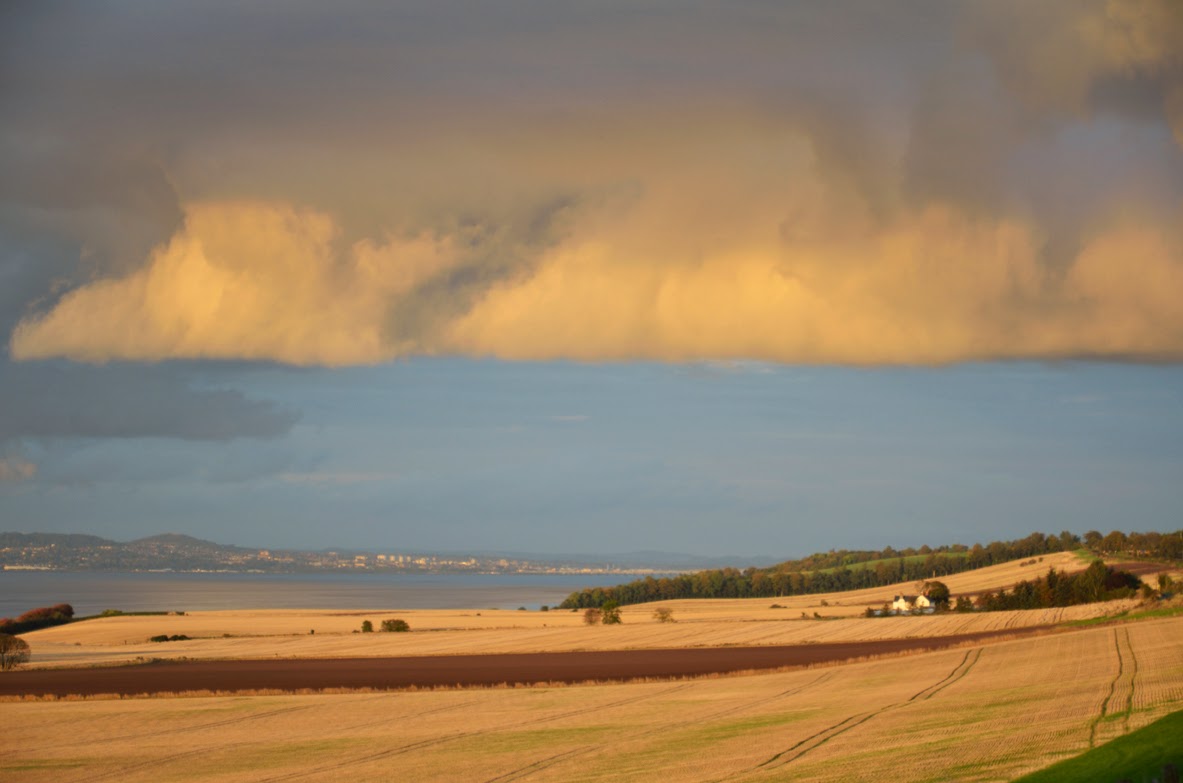 Posted by Peter Mannox at 6:15 PM No comments: 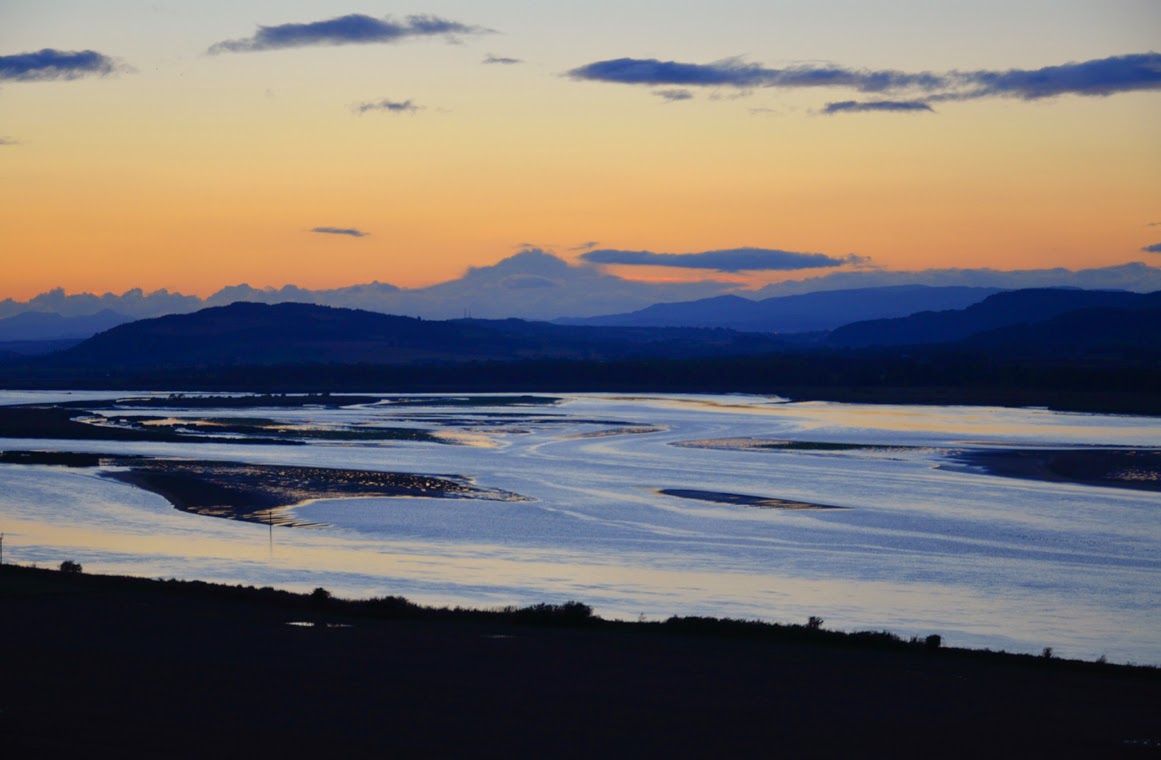 Posted by Peter Mannox at 5:52 PM No comments:

Glen Sma Perthshire, heather covered hillsides, in the gullies and aside of the scree  blue berries thrive. On the road very few vehicles pass by either way... magical to be in such a natural and quiet space. 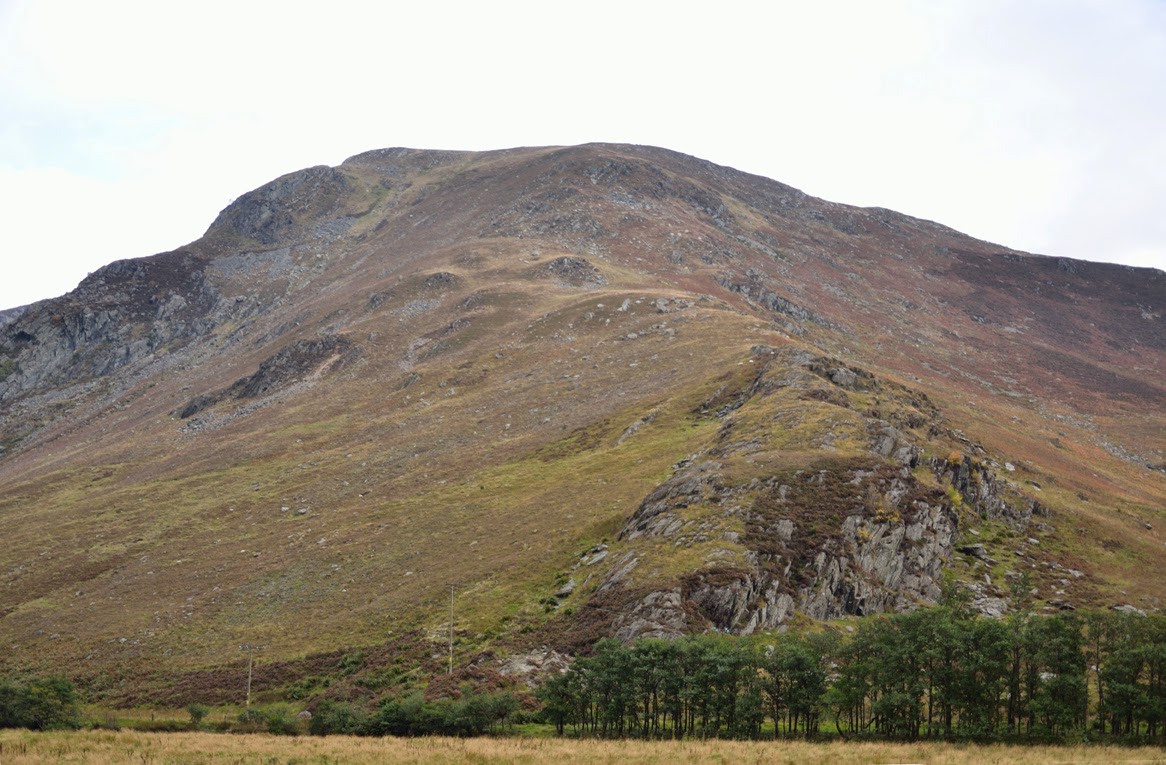 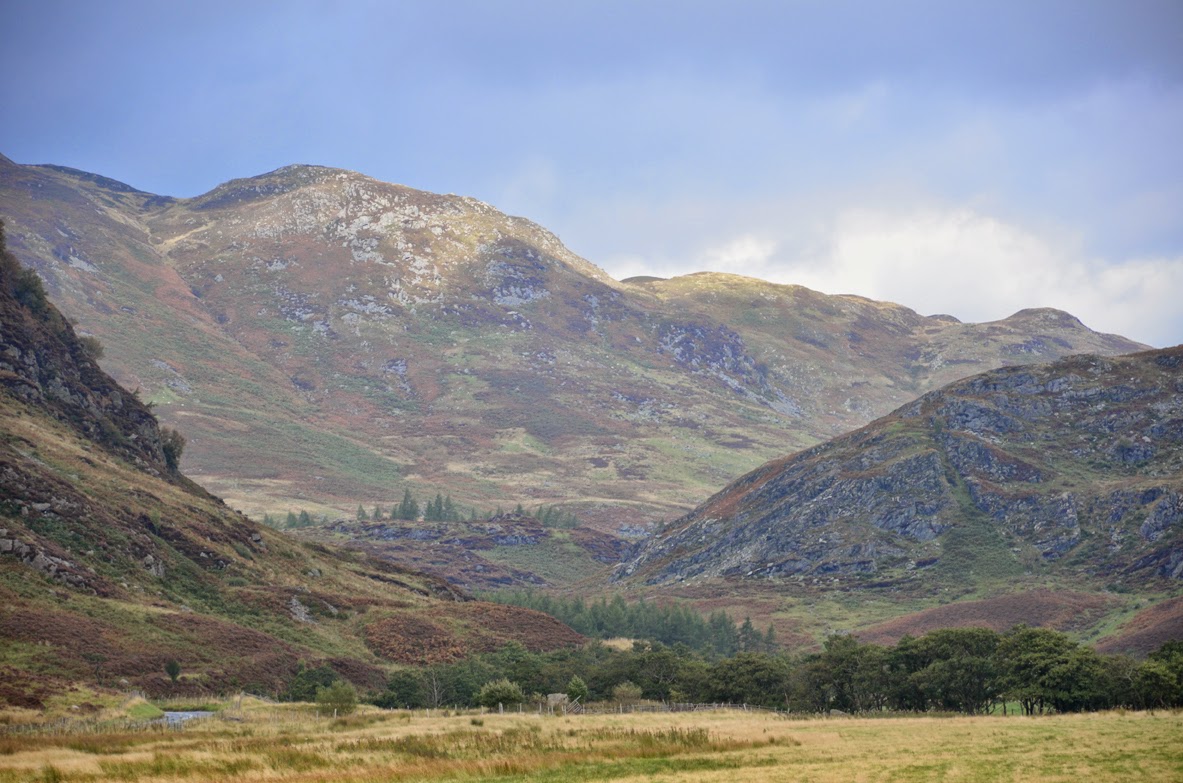 This wee wander was on the way to The Hermitage. 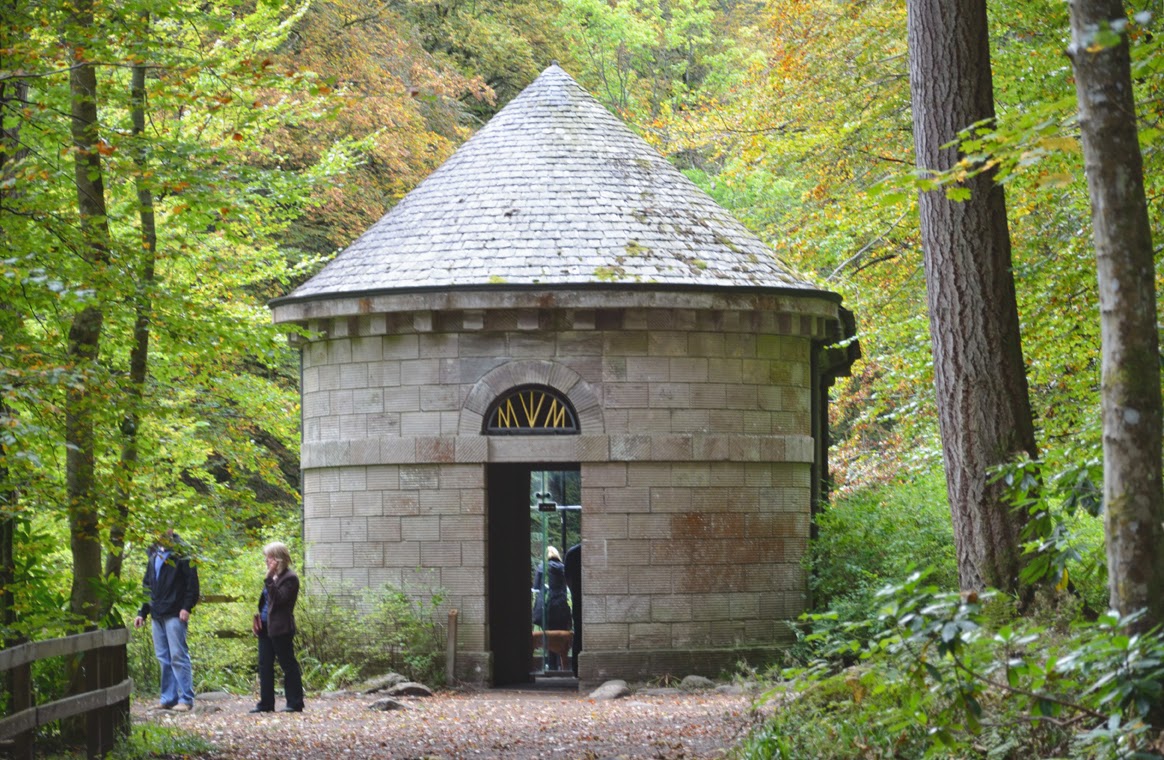 The Hermitage sits astride the river Braan at a spectacular waterfall, at the rear a vantage point gives a wonderful view where salmon and sea trout struggle against the falling water at (the Black Linn Falls) to swim to mating and spawning waters upstream. 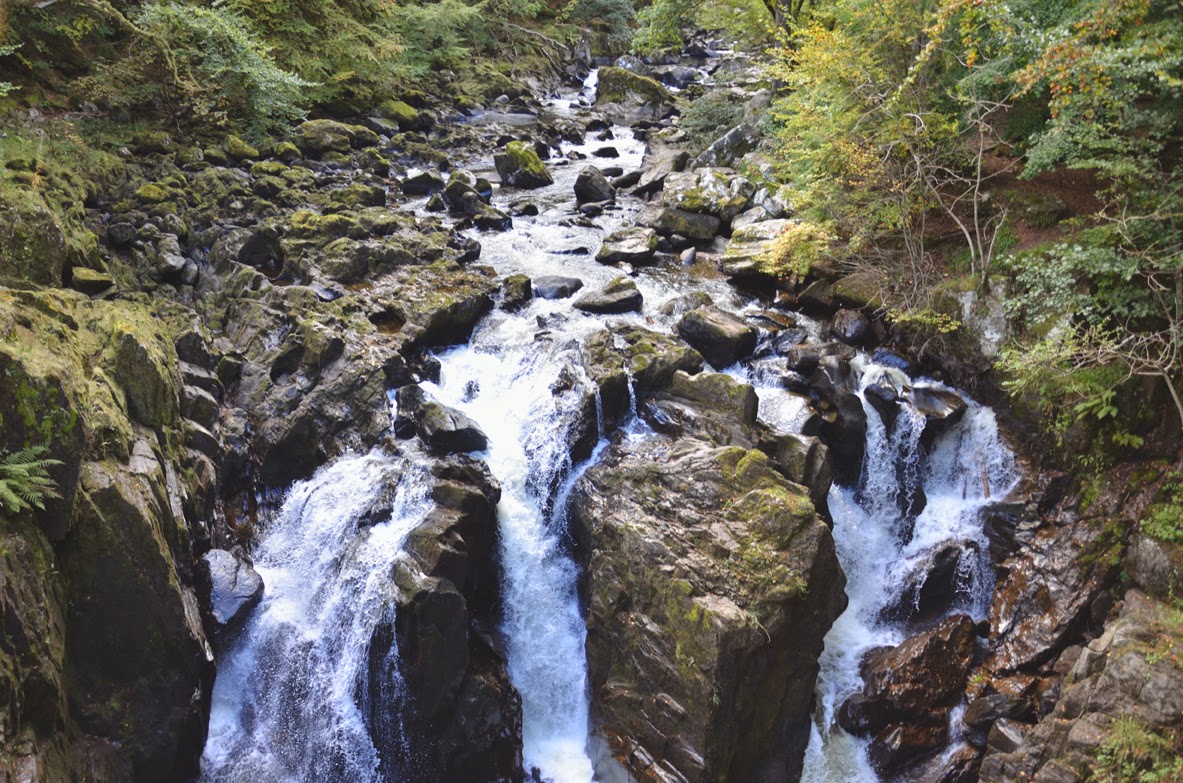 Once part of one of the most important 18th century picturesque landscapes in Scotland, an attractive woodland walk leads though spectacularly large Douglas firs (including one of the tallest trees in the country) to the amazing folly, Ossian’s Hall overlooking the Black Linn waterfall.
Follow in the footsteps of notable visitors of the past including Wordsworth, Queen Victoria, Mendelssohn and Turner as you wander around this magnificent designed landscape with it’s dramatic natural features.
Ossian Hall was refurbished in 2007 with sliding panels, secret handle and mirrored artwork to recreate the illusions of shock, surprise and amazement, the aims of its original design.
Enjoy the wildlife as you walk along the river Braan, with the dark foaming pool and the spectacular Black Linn waterfall. Let your imagination run wild as you admire the Totem pole, carved from a Douglas Fir tree by a native Canadian from the Squamish Nation. Extend your walk by linking in to one of the trails of the Dunkeld walks network. 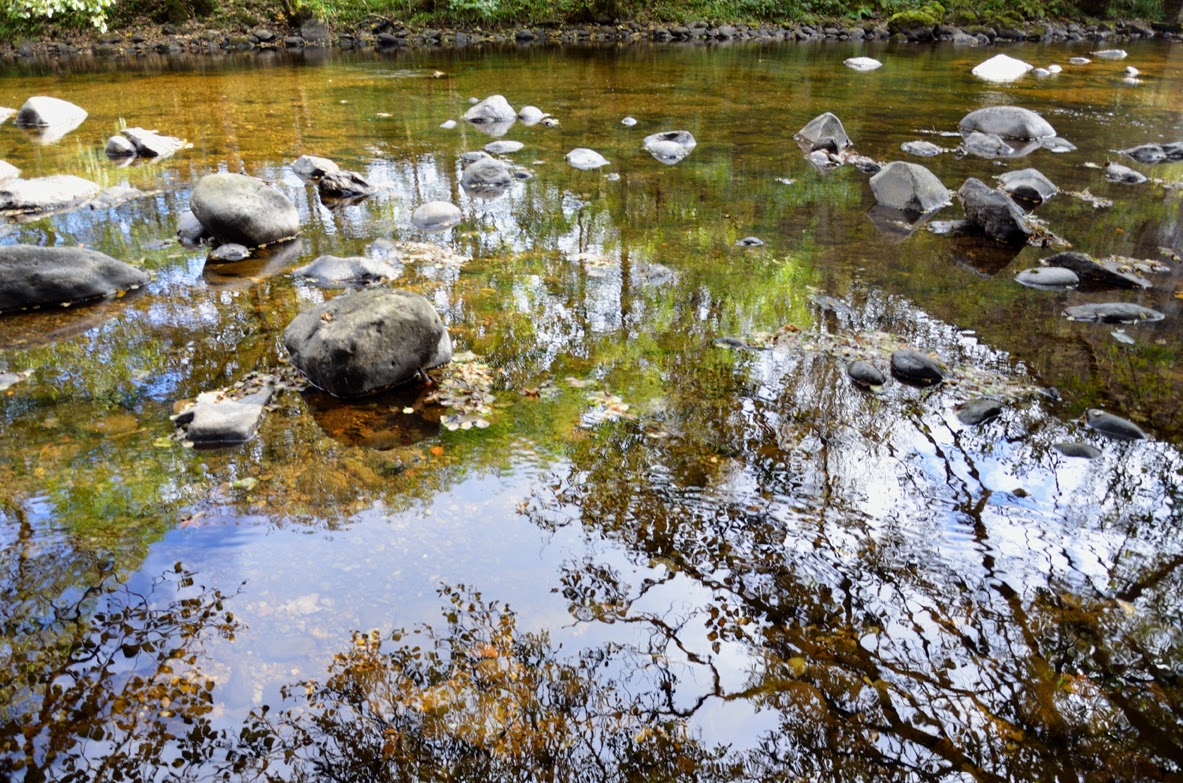 Down by the river Braan 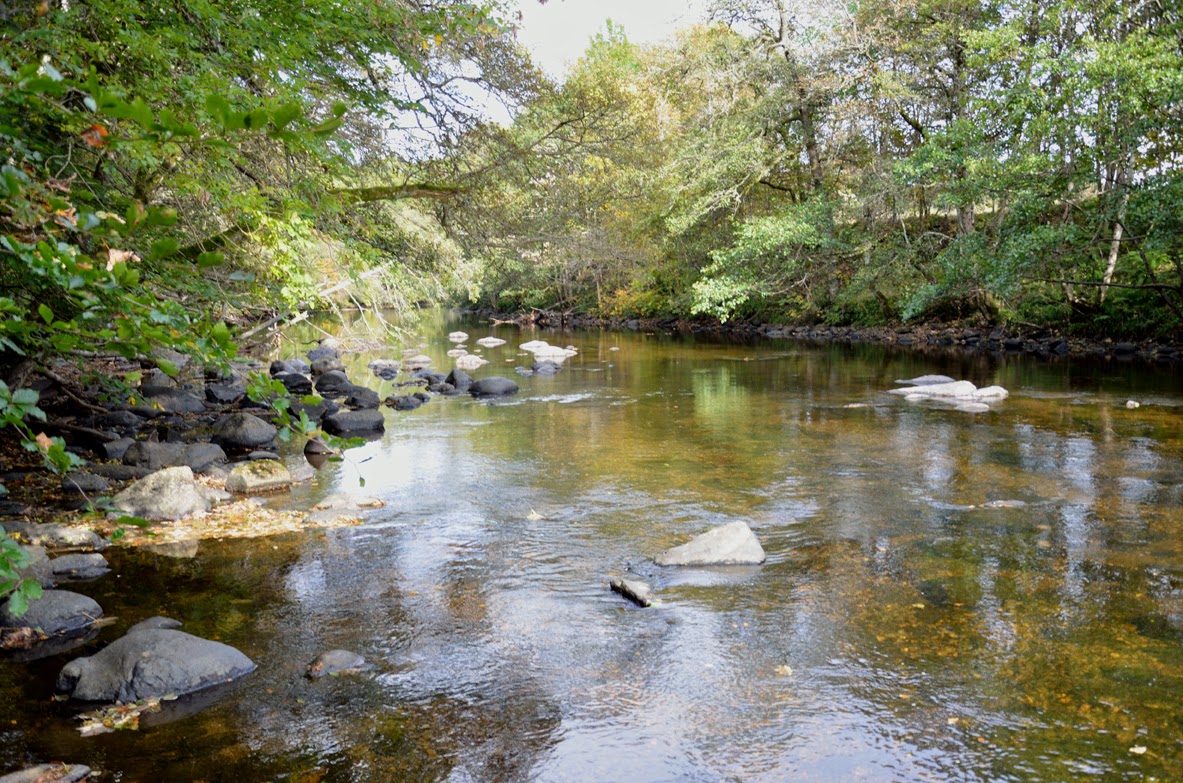 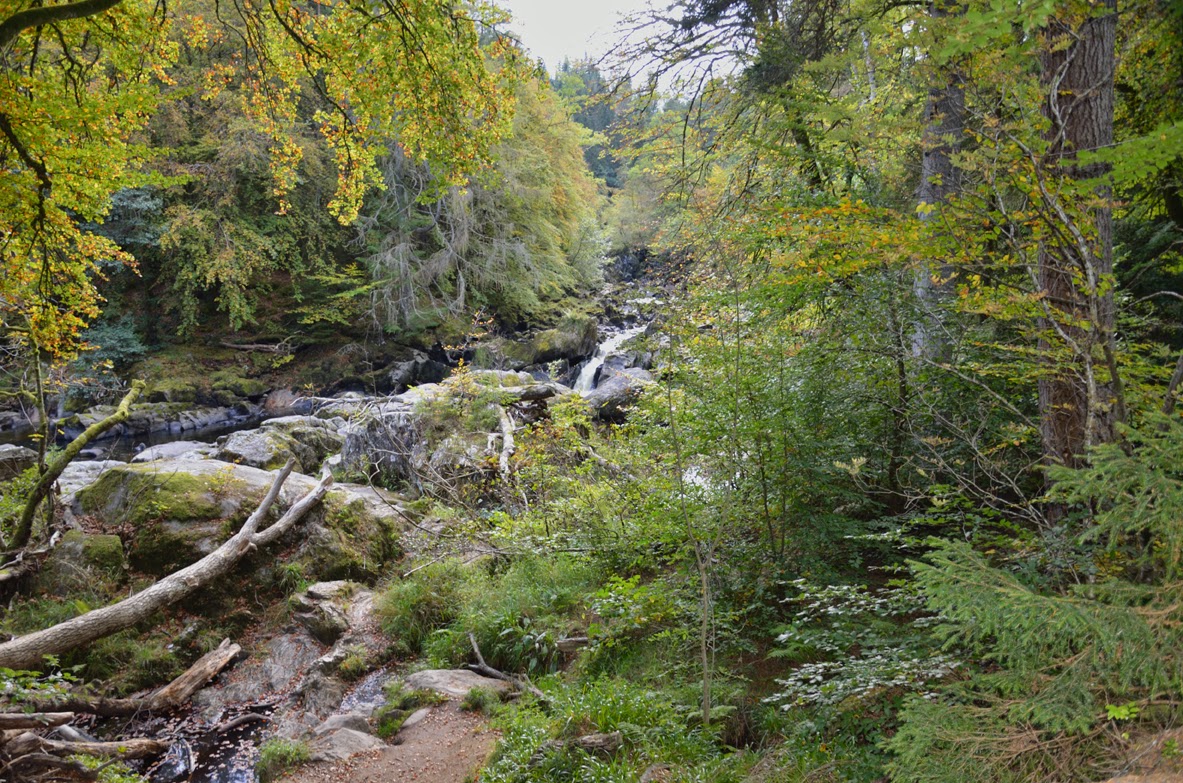 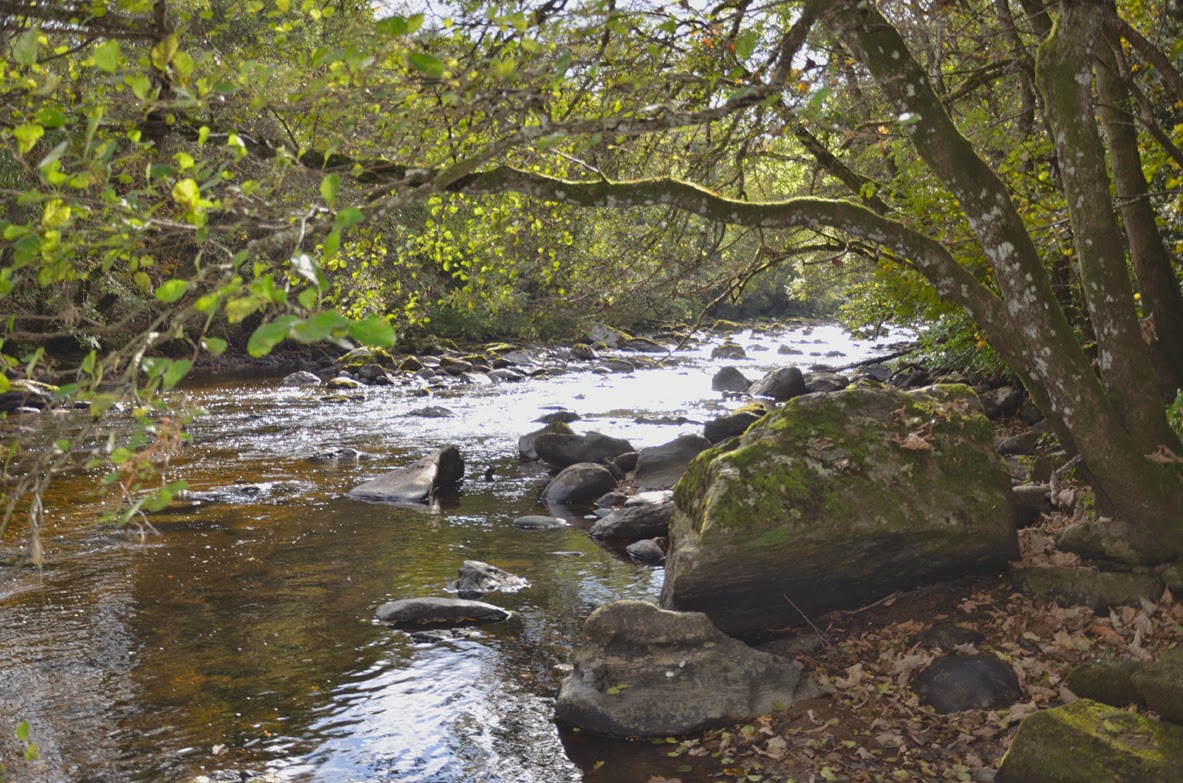 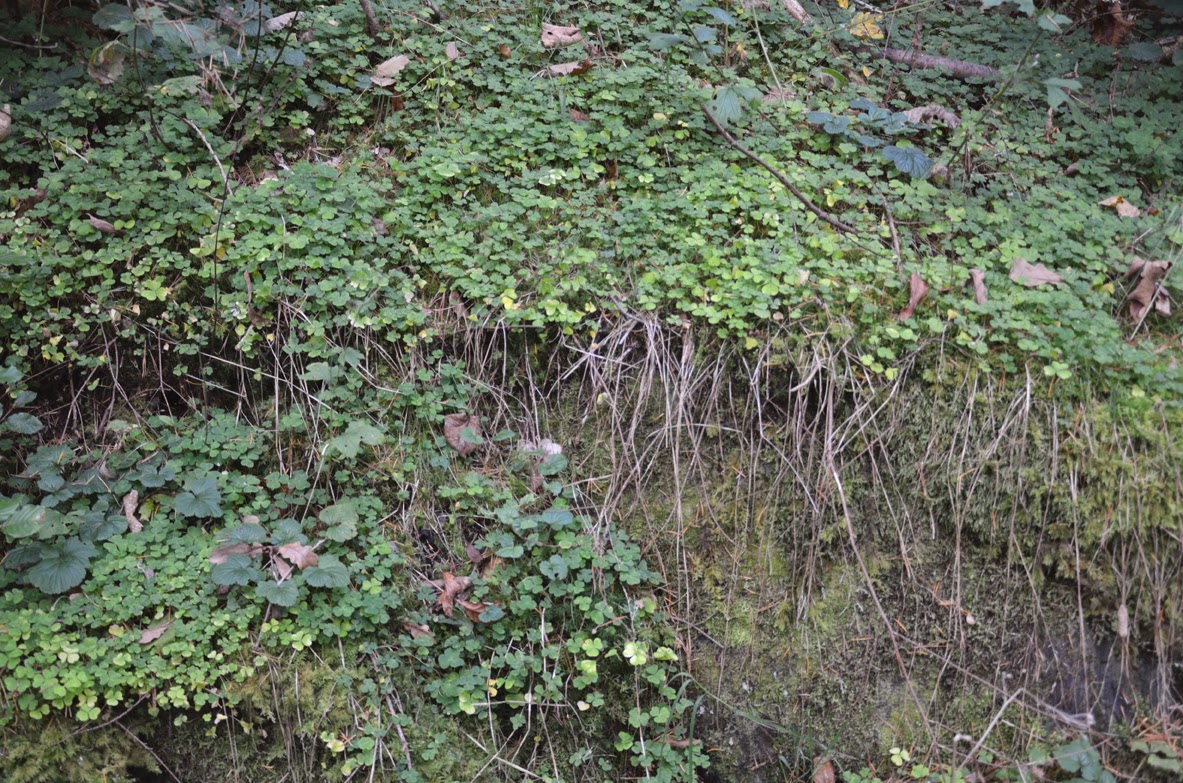 Such richness, well worth a visit and it's free apart from a wee parking charge. Such are our times.
Posted by Peter Mannox at 9:00 PM 1 comment:

Peter Mannox
Upper Flisk, Newburgh, Fife Scotland, KY14 6HN, United Kingdom
In 1979 I moved To North Fife from the Borders originally for a year, became captivated and have loved being here ever since. In a word magic. The climate, peoples, environment, air. views, All is quite wonderful and maybe on my blog you too can get a feel of that and enjoy too. I am art and craft trained from 11 years old leading me to photography/giclee printing from my studio in The Steeple Newburgh North Fife. All Photographs subject to copyright