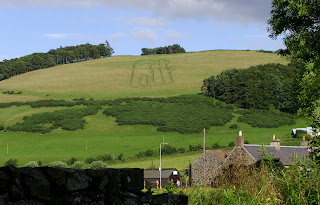 The Bear and Ragged Staff dug into Parkhill Newburgh. 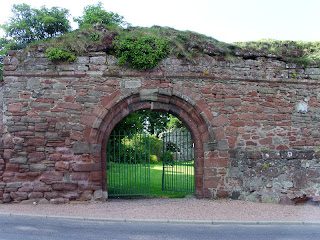 Norman arch entrance to Lindores Abbey ruins. Strangely it has a wooden keystone, inserted when? Who knows but slippage can be clearly seen as the wood shrinks with age.

Newburgh, in North Fife, on the banks of the River Tay, has had a settlement or a village on the present site from a period much earlier than the end of the twelfth century, but it was at this time that the village grew in importance, due to the founding of Lindores Abbey.

Perhaps the most important and historic event ever witnessed at Lindores Abbey was the meeting here in 1306 of three puissant knights, Sir Gilbert Hay of Errol, Sir Neil Campbell of Lochaw, and Sir Alexander Seton, and the sealing before the high altar of the vow they made to " defend the King Robert Bruce and his crown to the last of their blood and fortunes. "

William Wallace was also here when he stole hither out of Black Earnside Wood for water for his wounded men. And in Newburgh tradition, the Clatchard Craig, which faces the Abbey with a sheer cliff of two hundred feet, is pointed to as the stone whereon he whetted his great two-handed sword !

Lindores Abbey, which was once a wealthy Abbey, older and more famed than Balmerino, is now deserted and in ruins. Yet, Kings Warriors and Statesman who had a considerable part to play in Scottish history have frequented this ancient site. Brave men have walked here. Brave words have been spoken here, and for centuries men worshipped and praised God in this now inconspicuous site.

David, Duke of Rothesay, the ill-fated heir to the throne was quickly buried here in 1401 after having been put to death in Falkland Palace. For many years James the ninth and last of the line of the " Black Douglases, " found retirement here.

David, Earl of Huntingdon, was the founder of this Benedictine House of the Tyronesian Order, which was colonised by monks from Kelso at the end of the 12th century and dedicated to St Mary and St Andrew in gratitude for the taking of Ptolemais in Palestine. Other visitors were William the Lyon; the second and third Alexanders, one of whom brought interdict on Lindores and Scotland through his quarrel with the Pope, while the other had his son and heir buried here.

Edward I, the " Hammer of the Scots, " was here in 1296. Lindores also saw David II, many Stuart sovereigns, including of course, Mary. Before her visit, and angry Dundee mob had, in 1543, assailed the abbey, ejecting the monks and destroying much of the furnishings.

The most famous Abbot was the great theologian and inquisitor Lawrence, one of the founders of St Andrews University.

The village of Newburgh was erected into a burgh-of-barony by Alexander III, in 1266 in favour of the Abbot and Convent of Lindores. In 1457 it was converted into a royal burgh. In 1631 Charles I, confirmed the ancient royal charter, but the burghers never exercised their right of sending a member to the Scottish Parliament. In the wall of a building in Newburgh High Street, and facing north, is an interesting relic of Lindores Abbey. It shows a badge with a shield above surmounted by a crosier or pastoral staff. The badge is the same as was borne by the ancient Earls of Warwick - namely the bear and ragged staff. The stone must have at one time been part of the Abbey's decorations or the Abbot's residence.

The bear in the stone harks back to the time of Arthur and the Round Table. One of his knights was Arthgal, whose name in the British language was Arsh or Narsh, signifying a bear. The ragged staff is attributed to Morvidus, an earl of the same family remarkable for his courage and skill, who slew a formidable giant by means of a young tree, which by his great strength he had torn up for the task.
Posted by Peter Mannox at 7:55 PM

Peter Mannox
Upper Flisk, Newburgh, Fife Scotland, KY14 6HN, United Kingdom
In 1979 I moved To North Fife from the Borders originally for a year, became captivated and have loved being here ever since. In a word magic. The climate, peoples, environment, air. views, All is quite wonderful and maybe on my blog you too can get a feel of that and enjoy too. I am art and craft trained from 11 years old leading me to photography/giclee printing from my studio in The Steeple Newburgh North Fife. All Photographs subject to copyright